The Place for BC Lion Discussion. A forum for Lions fans to talk and chat about our team.
Discussion, News, Information and Speculation regarding the BC Lions and the CFL.
Prowl, Growl and Roar!

Thanks to the generosity of artist Jeremy Bresciani we at Lionbackers.com are going to raise some money for CFL Fans Fight Cancer by raffling this print 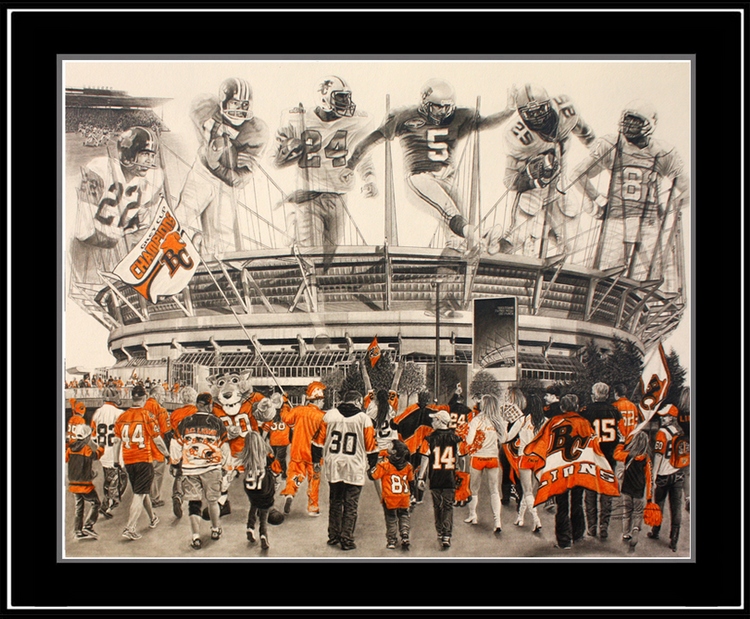 For your chance to win this print and help a great cause simply donate $10 or more via PayPal.
On Grey Cup day one of the donators emails will be randomly selected as the winner.

All Proceeds will go to CFL Fans Fight Cancer

More info on the Print
Size = 18"x 24" and it is 1 of only 954, Retail Price is $109 CDN
Completed September 18, 2012.
This drawing was inspired by the proud history of the BC Lions and their strong fanbase. The piece captures the feeling of being a BC Lions fan as fans walk to BC Place on gameday. Ghosted in the sky above the stadium are six of the many great players that have captured the hearts of Lions' fans since their inaugural season in 1954. From left to right: Joe Kapp, Willie Fleming, Merv Fernandez, Lui Passaglia, Sean Millington and Geroy Simon. Each of these players has won atleast 1 Grey Cup as a Lion and represent each of the Lions' 6 Grey Cup seasons. Fan jersey numbers pay tribute to these players as well as Jim Young, Doug Flutie, Travis Lulay, Paul McCalum, Darren Flutie, Jason Clermont, Brent Johnson, Norm Fieldgate, By Bailey, Alan Wilson, Jamie Taras, Ted Gerela, Bill Munsey, Dave Dickenson, Cory Philpot, Larry Crawford, Barron Miles, Damon Allen, James Parker, Ray Alexander and Ryan Phillips. Ghosted in the sky behind Joe Kapp and Willie Fleming is a game scene from Empire Stadium where the Lions played from 1954 to 1982 before moving to BC Place.

For more info on Jeremy Bresciani and his fine art visit http://www.jeremybresciani.com
Thanks again to Jeremy for his Generosity

smphantom wrote:If Crazy P wasn't in it (Left #44), I would have more interest

But I am in it, even more of a reason to donate!!!

AMAZING ARTWORK INCLUDING BC LIONS, CHECK OUT JEREMY BRESCIANI'S ARTWORK

TheFanWithTheFlag wrote:But I am in it, even more of a reason to donate!!!

more reason for you to buy a ticket

bump .... not many entries so if you like this print you have a very good chance of winning