Must be 18 to enter! Talk about anything but Football

Here's an article from today's Vancouver Courier that offers perhaps a refreshing change of pace from the direction of this thread, on the thriving business of independent grocers and smaller local chains in the Metro Vancouver region who are succeeding against competition from larger/national grocers. They're gaining ground because the larger retailers are either unable or unwilling to address the increasingly segmented market created by increasing numbers of people with highly varied dietary requirements. I've mentioned my own issues in this regard before and there's no way I could depend on a place like No Frills or even Safeway for all my grocery needs and I'm surely not the only one. Some shoppers are also more conscious about supporting the local economy rather than shopping in places where their money flows out of the region (or at least is perceived to do so).

The existing Stong's Market near 30th & Dunbar in Vancouver will close next year to make way for a condo project but reopens a month later just 3-4 blocks north in another building that offers almost 50% extra capacity above current.

Independent grocers and small grocery chains are expanding across Metro Vancouver even as consolidation makes national competitors ever larger.

The expansion comes not only from longtime independent grocer Stong’s Market, but also from the small chain Choices Markets and newcomer Pomme Natural Market.

Stong’s Market owner Cori Bonina helped turn sod at a March 31 groundbreaking along with politicians, developers and others involved in Northwoods Village on Dollarton Highway in North Vancouver.

Bonina plans to open in the development her second Stong’s store when the project is complete early in 2016. The 20,000-square-foot grocery store would be the first new Stong’s location in 26 years.

“We were on the North Shore 20 years ago when we had four stores,” Bonina told Business in Vancouver after the ceremony. “We always wanted to come back.”

Bonina has lived in North Vancouver for decades and believes that demand for an independent grocer is strong.

She is a fourth-generation owner of the company and is also preparing to move her longtime grocery store on Dunbar Street into larger premises. Her family has operated a 14,000-square-foot grocery store at 4560 Dunbar Street for decades, but the location is slated for redevelopment.

Her future Dunbar Street store would be larger, at around 20,000 square feet, she said.

Other grocers are similarly expanding.

Upstart Pomme Natural Market, for example, has four owners who aim to open 10 stores in 10 years and are already ahead of schedule.

The Victoria-based foursome of Rasool Rayani, Ed Low, Dave Arnsdorf and Craig Hermanson opened a 16,000-square-foot location in Port Coquitlam in January 2014, and then added a 5,000-square-foot second store on Davie Street in Vancouver earlier this year.

Both of those stores involved buying an existing grocer and then renovating and rebranding.

A third Pomme Natural Market is slated to open this summer in Nanaimo.

“There are no more openings in the immediate future,” Hermanson told BIV. “It’s been a lot with three in the last year and two in the past two months, so we’re in a bit of a consolidation phase. But 10 stores in the Lower Mainland and on Vancouver Island is our goal.”

Choices Markets has also been expanding by buying existing grocers and then rebranding them.

For example, the Vancouver-based company bought the Drive Organics on Commercial Drive earlier this year.

When Drive Organics rebrands, it will raise Choices Markets’ store count to eight locations – seven in Metro Vancouver and one in Kelowna.


Sports can be a peculiar thing. When partaking in fiction, like a book or movie, we adopt a "Willing Suspension of Disbelief" for enjoyment's sake. There's a similar force at work in sports: "Willing Suspension of Rationality". If you doubt this, listen to any conversation between rival team fans. You even see it among fans of the same team. Fans argue over who's the better QB or goalie, and selectively cite stats that support their views while ignoring those that don't.

Robbie wrote:Bino's - there used be over a dozen of them and they opened 24 hours. They only have one location in Kingsway and Joyce.

Are we counting all of BC, or just the Lower Mainland? Because I think there are still a few others around BC.

We used to hang out at the Richmond (No. 3 Rd.) Bino's all the time in the late 80s/early 90s; that was largely driven under by the owner (there's a whole other amusing-in-hindsight horror story there, I won't get into in this thread). When we were on tour, the first thing we'd always look for in every town was the Bino's - the food and coffee were "okay" but at least they were always consistent. We actually kept track of them, too - it was our mission for a while to visit every Bino's in BC

I mentioned before that the franchise was wealthy enough to even sponsor the uniforms of the 1989 BC Lions cheerleaders. The uniform was a sharp contrast from their uniforms from 1983-88 in that in 1989 it featured black leggings and a white tank top with the word Bino's on it and it also appeared on the side of their pants as well. You can see a clear picture of their uniforms at the very end of this clip.

As mentioned in the other thread, England-based HMV left the Canadian market.

American-based Express clothing stores felt that Canada is not a good market and will be closing all their stores as well.

Stores and restaurants are like rainbows. They show up and then disappear. The retail market has changed and store front retailers need to understand that they better have the product or risk losing the sale. I went to one of the Caps stores a couple of weeks ago for a couple of bike tires and inner tubes. Nothing fancy or unusual and they didn't have em. Said they could order in but it would be 3 days! For a bike tire! Or I could drive out to Maple Ridge to their other store. Of course they wouldn't mention the other bike store 3 times a close. Grudgingly they admitted I could go there and later grudgingly admitted that they didin't have a lot stock right now because they had been bought out and hadn't made the change over to the new owners. I had called them before going down mind you and they didn't say a thing about it. To many times, that kind of thing happens and it angers the customer. If I have to wait three days for something, I might as well order it online and have it come right to my house.

Re: Closing/Extinct Franchise Businesses in the Lower Mainland

Robbie wrote: ↑Wed Sep 03, 2008 11:36 am While there's still several Dairy Queen and A&W franchise locations, its format has really changed from 30 years ago. Nowadays, the franchises are located in food courts and they are merged with another parent franchise such as Orange Julius.

Dairy Queen used to be in the form of an ice-cream stand. 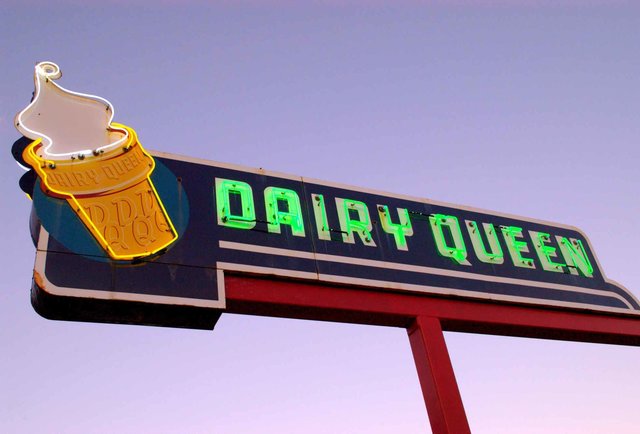 While there are still a few around, a long-time Dairy Queen which opened in 1969 still showed their old, iconic Brazier brand logo located E. Hastings St and Lakewood Dr was forced to closed as a result of.....of course....redevelopment into a rental apartments and this trend will continue.

Did you ever go to this location?

Re: Closing/Extinct Franchise Businesses in the Lower Mainland

Robbie wrote: ↑Wed Sep 03, 2008 11:36 am While there's still several Dairy Queen and A&W franchise locations, its format has really changed from 30 years ago. Nowadays, the franchises are located in food courts and they are merged with another parent franchise such as Orange Julius.

Dairy Queen used to be in the form of an ice-cream stand.

While there are still a few around, a long-time Dairy Queen which opened in 1969 still showed their old, iconic Brazier brand logo located E. Hastings St and Lakewood Dr was forced to closed as a result of.....of course....redevelopment into a rental apartments and this trend will continue.

Did you ever go to this location?

pretty sure I did. Used to hang out up and down hastings some in the 70's

Every day that passes is one you can't get back

There was a similar one on Hasting in Burnaby in the 70's . That was somewhere between Rosser and Gilmour . That one pre dated the "Brazier" model. There was also one for years at Clarke Rd on Coq. Burn border . ALL long gone now of course.

Sir Purrcival wrote: ↑Fri Feb 09, 2018 1:30 am There was a similar one on Hasting in Burnaby in the 70's . That was somewhere between Rosser and Gilmour . That one pre dated the "Brazier" model.

If I really liked a particular franchise, I wouldn't have too much of a problem if the particular business simply upgraded, or perhaps a more accurate word would be downgraded if the physical space became smaller. But the most important thing is that the business is still around and operating in the general area, even if it simply moved a block or two. And regarding that area that you described, there is indeed still a Dairy Queen at 4191 E. Hastings in Burnaby.

Maybe the owner of that location moved to nearby Lougheed Town Centre. In this case, the downgrade turned from a standalone location to a booth in the food court.

But overall though, it's still not as bad as completely and permanently closing the franchise altogether. In the Dairy Queen that was originally mentioned on E. Hastings St and Lakewood Dr, that is indeed a permanent closure.

On a similar note, the A&W also close to E. Hastings St and Lakewood Dr, it used to be those traditional drive-ins. As the times went by, it became a standalone building. But let's see how long that A&W will survive altogether.