BC Lions who have had thier numbers retired

WILSON, AL, Elected as a player on September 20, 1997. Al Wilson played 15 years with the B.C. Lions from 1972 to 1986 as a guard and centre. Wilson was awarded the All-Western All-Star and All-Canadian All-Star honours for seven consecutive years from 1975 to 1981. He was voted the Schenley Most Outstanding Offensive Lineman in 1977. Wilson participated in two Grey Cup games in 1983 and 1985 and was a member of the Championship team in 1985. 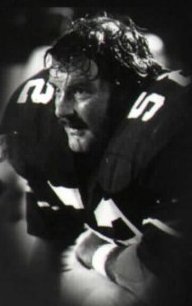 The most decorated BC Lion ever, Al Wilson was named to the Western/All-Canadian All Star team seven straight years from 1976 to 1981. He was also named the top lineman in the West three times - 1976, 1977 and 1978 - and voted by the Football Reporters of Canada as the Most Outstanding Offensive Lineman in the CFL in 1977 and was a finalist in that category on two other occasions (1976 and 1978). He retired at the end of the 1986 season after playing in 233 games, a mark only surpassed by Lui Passaglia. He started every game in played in at center and helped guide the team to the Grey Cup Championship in 1985. Al’s charity activities are widely known in the Lower Mainland and Vancouver Island and his annual golf tournament in Duncan helps raise money for the Red Cross. Elected into the BC Sports Hall of Fame May 6,1997 and inducted into the CFL Hall of Fame in the fall of that year.

I assume he was maned 'Dirt' for the same reason as Jim Young. For his hard nosed play. Not to be confused with Angelo Mosca's 'dirt'.