BC Lions who have had thier numbers retired

There are several remarkable feats in Lui's career;
He has spent his entire 25 years in Pro Football with his Hometown team the BC Lions
He is Pro Football's All Time Leading Scorer
He is good enough to enter the Hall of Fame not only as a Place kicker but also as a Punter 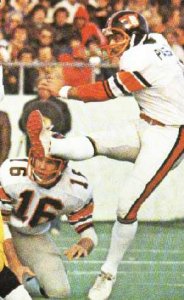 "LOOOOOOOOOO"....Record-breaking kicker and punter Lui Passaglia is back for his incredible 25th season, a silver anniversary milestone never reached before in the history of the Canadian Football League... A Vancouver native who went to Simon Fraser and has never played for another CFL team...Born two months before the Lions played their first-ever game as a franchise, Lui enters the season as a 46-year old who has stayed in excellent shape...Holds almost every imaginable pro football career punting and field goal record...One of B.C.'s most recognizable sports figures...Has a high-profile job outside of football as well as he works for ICBC.

LIONS 1999: Passaglia still had the goods in his 24th season, which gave him the record for most seasons played in the CFL, surpassing Eddie Emerson who played with the Ottawa Rough Riders from 1911-14, 1919-35 and 1937 ... 24 seasons continued Lui's record for most consecutive seasons with one team in pro football ... Showed he hadn't slowed down as he had a respectable 42 yard punting average and made 30-of-47 field goals...Was voted a West Division all-star for the eighth time in his career...His busiest punting game was in the opener, when he punted 13 times for 535 yards and also kicked a field goal in a 25-13 B.C. win over Edmonton...Hit double digits in punting a week later against Calgary as he punted 11 times for 450 yards and also kicked a pair of field goals in a 37-27 Lions win...His best game average-wise was on August 5 against Calgary., when he average 51 yards on six punts, including his season-best 75-yarder...Kicked at least one field goal in every game except one, the 14-1 loss to Calgary on Oct. 24...His best game came against Montreal on September 2, when he was 3-for-3 in a 44-23 Lions win...Also kicked three field goals in games against Calgary on August 5 and Saskatchewan on August 26...His longest field goal, a 47-yarder, came against Calgary on September 25...In the Western Final, he kicked one field goal and punted 10 times for a 40.7 yard average.

1998 A record year for football's most prolific player ... Lui tied his own record of 52 field goals, which he first established in 1987 ... He also tied a BC Lion record with seven field goals in one game vs Saskatchewan on October 25 ... The last time he kicked seven field goals in a game was September 6, 1985 vs Toronto ... The CFL record for field goals in a game is eight held by three players - Dave Ridgway, Mark Mcglouglin and Paul Osbaldiston...Passaglia also had a respectable 44.1 yard punting average, which was his best single-season average since 1985...Voted a West Division all-star...Also returned as the Lions regular kickoff guy with 51 kickoffs for a 55.7 yard average.

1995 Lui surpassed the 3,000 point plateau against Toronto July 13th ... He finished the season with 195 points, the 3rd highest point total in a season during his career...Had 194 points, which was the fourth highest total of his career

1994 A storybook season for both Lui and the BC Lions ... On many occasions Lui was given the opportunity to come into the game late and win it with a field goal ... He won the season opener for the Lions with a 46 yard field on the final play of the game, foreshadowing events to come against Baltimore ... Lui kicked the Lions into the Western Final with a 27-yard field goal against the Eskimos ... After upsetting the Stampeders in Calgary, the Lions took on the Baltimore Stallions in the 1994 Grey Cup Game at BC Place ... Passaglia once again played the role of "Hero" as 55,000 screaming football fans cheered and he connected on a 38 yard field goal on the final play of the game to give the Lions their third Grey Cup Championship in team history ... For his efforts in the 26-23 win over Baltimore, Passaglia was named Most Outstanding Canadian of the Grey Cup for the second time in his career.

1992 A Western all-star once again...Set the record for the most field goals and most field goal attempts, breaking the previous marks of 464 and 790 held by Dave Cutler.

1991 Passaglia scored 210 points, which was the second time in his career he surpassed the 200-point plateau...Became the league's all-time leader in converts and set a record for consecutive converts (398)...Made 44-of-59 field goals, including tying his career high of 54 yards...Also punted the ball 111 times for a 41.5 yard average.

1980's In 1989, Passaglia became the league's leader in all-time field goals...In 1988 he became the leader in all-time CFL punting yardage and had a tryout with the NFL's Cleveland Browns...In 1987, he set the CFL record for most field goals in a season with 52, which has since been surpassed by Dave Ridgway, and became the first player in football history to surpass 200 points in a season (214)...Lui had a solid year in 1985 and was a key contributor in the Lions march to their first championship in 21 seasons ... Passaglia scored 19 points against Hamilton in the Grey Cup and was named the Most Outstanding Canadian of the game ...In 1984, Passaglia was a CFL all-star and led the team in scoring...1983 was another record breaker for Lui ... He averaged an outstanding 50.2 yards a punt for the entire season, bettering the previous mark by 1.7 yards per punt held by Joe Zuger ... He again led the CFL in scoring and was named to the CFL All-Canadian team as Punter and Kicker ... Lui played in his first Grey Cup game averaging 41.9 a punt and connecting on a 31 yard field goal in an 18-17 defeat to the Toronto Argonauts...Passaglia earned his third Western all-star honour in 1980.

1970's Lui started his CFL career with the Lions in 1976 after being the Lions 1st round pick in the 1976 CFL Draft from Simon Fraser University ... Lui scored his only TD in his first professional game July 22/76 vs Saskatchewan on a 10 yard pass from John Sciarra ... Lui went on to break the Lions' record for points scored in a season with 130 ... In his second season, Lui set the Lions' record for Field Goals in a season with 40 and was named to the 1977 Western All-Star team for the first time ... In 1979, Lui was named to the CFL All-Star team for the first time as a kicker, scoring 144 points.

PERSONAL Lui grew up in East Vancouver and graduated from Notre Dame High school ... He was a quarterback in high school and then attended Simon Fraser University where he played receiver and kicker ... He recorded 175 career points for the Clansmen and was a two time All NAIA District 1 and All-Northwest All-Star ... Lui is a qualified teacher and spends his off-season doing promotional work for the Lions and charitable organizations ... He is also works for ICBC's "COUNTER ATTACK: game plan a safe ride home" an impaired driving initiative throughout the year ... Lui, his wife Loa, daughters Lea and Lauren and twin sons Colby and Christopher make their home in Port Coquitlam. 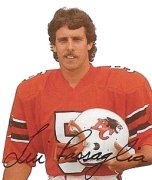 Just another 3 points for Lui and the Lions ! 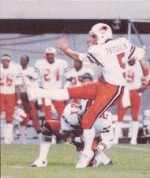 Celebrating the winning field goal in the 1994 Grey Cup!